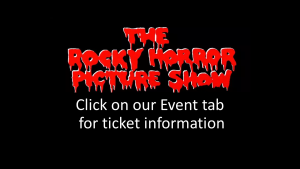 Picture it: Sault Ste. Marie. 1991. A group of self-described outcasts and misfits were dressed in costume for a Sunday afternoon screening of Rocky Horror in our parents’ wood paneled rec room with sunlight still streaming in the windows. We threw the rice and the toilet paper (as long as we had it cleaned up by suppertime). With the discovery of this often terrible, occasionally scary, bizarre, sexy movie, we were now part of a secret club of other misfits like ourselves (which also included adults who had joined the cult of Rocky the first time around). A club whose secret handshake was the Time Warp. There was something so empowering about this ridiculous movie that challenged gender and societal norms and encouraged us to be ourselves.

27 years later, join directors Eric Haapala and Christina Foster as they welcome back most of the original rec room cast (Nick Stadnyk, Jason O’Brien, Steve McCarthy) and many new misfits. We’re taking the show out of the rec room and into the stunning Grand Theatre on October 27. 7 pm show is sold out. But don’t worry, you can still get tickets for the classic midnight experience starting at 11:00 pm!

All proceeds from this event will go to Welcome Friend Association’s Rainbow Camp.  Director Christina Foster, a teacher, was, “At a PD day last year and my principal showed a YouTube video about how Rainbow Camp gives LGBTQ2+LGBTQ2+ youth a community: A place to connect with people like you. This is exactly what the Rocky Horror did for Nick and Eric and Steve and I as kids. We found our “people” through theater and Rocky in particular.  Eric and I had just decided to do Rocky and so the cause HAD to be Rainbow Camp.”

Harry Stewart and his partner, Chris Southin, agreed that RHPS fundraiser was a good fit with their organization and have taken the lead in promotion, tickets, etc.  They will also be selling prop bags at the door to raise funds for Rainbow camp.

What can people expect?

To see the cult movie the way it was meant to be seen. In the historic Grand Theatre (former Odeon) with live performers in front of the screen.  Transylvanians in the audience will guide audience members in the audience participation (as most people may not be familiar).  Call back lines will be subtitled on the screen.  Props will be thrown at appropriate times. Costumes are highly encouraged!

Tickets online at Eventbrite or pickup in person at Case’s music.

Welcome Friend Association is a Canadian registered charity (Registration no.:  830794715 RR0001) and issues tax receipts for amounts over $20.00